‘Alcaidesa Marina Sailing Team’ was proclaimed winner of the Mapfre Copa del Rey in the Herbalife J/70 class and crowned itself as one of the nine teams that rise to the coveted list of winners of the best regatta in the Mediterranean on its 40th. Anniversary. The boat of Germán Panei that has had Gustavo Martínez in the helm and a team completed by Robín Imaz, Mikel Pasabant and Flavia Tomiselli, distinguished itself for their consistency throughout the fourteen events contested, a result of the bravery and right decision making among one of the most competitive fleets in the regatta that ends today.

Another day, the team of the boat based at the sporting port of Línea de la Concepción, in Cádiz, has withstood the huge tension maintained in the fleet of monotypes to continue sailing better than its rivals and with two second places in the last two events wins by seven points over the second and third placed boats ‘Les Roches Tripsst’ of Pepequín Orbaneja and Luis Bugallo, and ‘Bodega Can Marles’ of Jorge Martínez Doreste, tied in second and third place of the podium respectively.

One of the anecdotes of this last day has been to see the brothers Gustavo and Jorge battle for victory in the first event of the day which was awarded to the team of Jorge ahead of his brother, both followed by the local boat  ‘Patakin’ and ‘Les Roches Tripsst’, with a fourth that allowed those from the Linea de Concepcion to increase their lead by five points in the face of the last regatta.

In the last event ‘Alcaidesa Marina Sailing Team’ pulled together to conserve and not complicate matters behind them and with another 2nd. behind the Palma boat ‘Nautia.net’ and a 3rd. from Orbaneja, sentencing victory, clawing two small additional points. 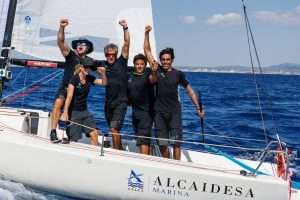 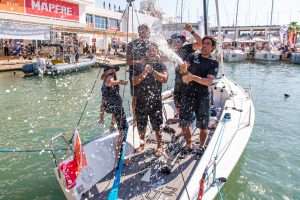 “We are happy, I believe we have done an excellent job battling the best rivals and with everything open until the last day. We congratulate all of them because the fleet as a whole is what has made it a spectacular regatta, although I also believe we are the righteous winners. Thank you to Alcaidesa Marina for their support because it is thanks to them that today we accomplished this great objective.” Germán Panei

“I believe the key to our victory has been our consistency without doubt, our worst heat was third, and well, our rivals have been a little more inconsistent. Today in our first regatta we were always in front of our rivals and in the following one it was a matter of controlling them to maintain the distance. So yes, very satisfied for the work done and looking forward to celebrating.” Gustavo Martínez Doreste.