In a surprise result, the boat ‘Michelle Team’ was proclaimed the winner of the second instalment of the Alcaidesa Marina Circuit of the J/80 Autumn Series, proving itself superior from the first compasses on Sunday, marked by an east wind that did not rise above 8 knots of intensity.

The final day has come to an end after three new tests, which added to those on Saturday, come to a total of six, with the option of applying a discard. The boat under the shared flag of CN Portosin and CN Nayade wins with a total of 9 points, followed with 11 and 14 points by John Bassadone’s ‘Peninsula’ (Royal Gibraltar Yacht) and ‘Alcaidesa Marina’ (CN Bevelle) captained by Gustavo Martínez Doreste, coming in second and third respectively.

‘Michelle Team’ in the lead 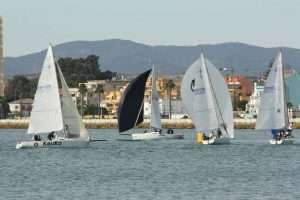 ‘Michelle Team’ from the Polish shipowner Halyna Phijfer with the Galician Javier Padrón on the tiller, went out today to defend its second place two points against John Bassadone’s ‘Peninsula’ and took the provisional lead after the first test today – the fourth of the championship – with a second ahead of ‘Peninsula’s fourth.

Without discarding this result, it would have left them tied, but the option of discarding the worst score allowed Phijfer and Padrón to advance with two points in their favour. In the second test of the day, they further secured their first-place position by winning out over ‘Alcaidesa Marina’ and ‘Peninsula’, who finished in second and third places respectively.

The reaction from the Bassadone team would come in the third round with a hard-won point that while not enough to return them to first place was enough to secure second, edging past ‘Michelle Team’ by just two points, which finished off a great day with a third-place finish. Things could have been worse for ‘Peninsula’ had ‘Alcaidesa Marina’ not suffered a puncture, finishing in sixth place, with only three points more than ‘Peninsula’ owing to a discard.

“It’s been a good weekend for the team, and it’s certainly a very good result in a very competitive fleet. The key has been to make very good starts,” says Javier Padrón, who has undoubtedly been the steadiest hand on the tiller among the fleet.

Fighting always in the lead today was ‘Marbella Team’ (RCM Marbella/CM Mahón) from the shipowners María Fiestas and Pepequín Orbaneja with Per Román as skipper. The team won the first round of the day, then added a fourth and a second, which together with the discard of a ninth on Saturday, has seen them rise from seventh to fourth place in the general standings of the second round.

In fifth and sixth place, separated by a single point, came Petter Fjelstad’s ‘Aponia Racing’ (KNS Norway) and Moncho Carrero and Pedro Butron’s ‘Kouko‘ under the flag of Algeciras de RCN, with Dani Cuevas on the tiller.

“We have to continue working to be in the top 5, we feel that we are on the way,” said the owner of the ‘Aponia’ which came out victorious this time around in an interesting battle between two great teams.

With a total of eleven events and in the absence of a single instalment for the final, the circuit’s general standings are still very well led by ‘Peninsula’, followed by ‘Alcaidesa Marina’ and ‘Marbella Team’. The next instalment will be the last in this autumn series, scheduled for the weekend of December 17 and 18.

Other news of interest: John Bassadone’s sailboat ‘Península’scores the first point of the circuit Alcaidesa Marina of the J/80 Autumn Series 2022